Every year, in the second week of October, National Marine Week is held in South Africa. This initiative aims to increase awareness of the need for rational management of water resources among the local community, politicians, businessmen, officials, academics, students and youth.

In 2015, the speeches and lectures were conducted in a specially produced Polidome 150 Exhibition dome tent. For POLIDOMES, this was the first contract with a company established and operated in the Republic of South Africa.

The event started with a speech by the Minister of the Environmental Protection, Edna Molewa. In her speech, she stressed that the local community had to realize that the oceans were not only a source of food, but also a place to live and rest, a means of transport and an energy source.

The whole exhibition was divided into two parts. The first was an exhibition space, the other a relaxation area. The youngest participants of the event were not forgotten. Short videos about the activities of the South African Ministry of the Environmental Protection and sea-related games were prepared for them.

A mirror maze was used as an interesting enhancement to the exhibition techniques. It reflected the projection screens and introduced the gathered people to the underwater world of the ocean. All this was possible due to a POLIDOMES Geodome tent, which did not go unnoticed by the guests.

The event enjoyed great popularity. This type of campaign raises public awareness in an unconventional way. Responsible use of the natural resources is beneficial for all of us, not only the citizens of South Africa.

Once again, we proved that POLIDOMES geodesic tents are not only a solution for the events, but can also be successfully used as a temporary promotional space for social and public service campaigns. 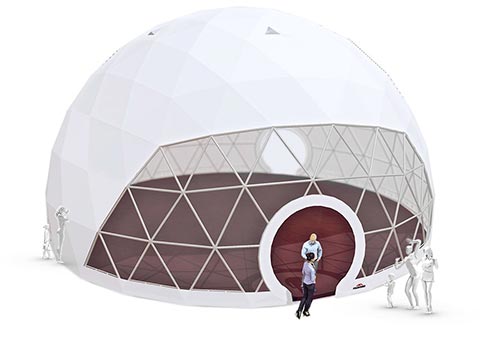